How China Has Changed Western Ideas of Law and Economic Development 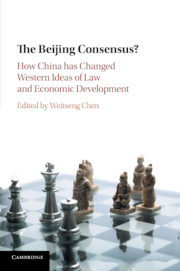 Is there a distinctive Chinese model for law and economic development? In The Beijing Consensus scholars turn their collective attention to answer this basic but seemingly under-explored question as China rises higher in its global standing. Advancing debates on alternative development programs, with a particular focus on social and political contexts, this book demonstrates that essentially, no model exists. Engaging in comparative studies, the contributors create a new set of benchmarks to evaluate the conventional wisdom that the Beijing Consensus challenges and that of the Beijing Consensus itself. Has China demonstrated that the best model is in fact no model at all? Overall, this title equips the reader with an understanding of the conclusions derived from China's experience in its legal and economic development in recent decades.

'The relationship between law and development is a question that just will not go away. This volume assembles a top-notch group of scholars to examine what China’s experience can tell us. While much of the previous work on this field has been done by economists, the contributors here are intimately familiar with the details of China’s legal system and offer new and stimulating insights in this terrific collection of essays.'

'In this volume, a set of first-rate scholars turns their collective attention to dissecting a slogan and helps us to understand what we can - and cannot - conclude from China’s experience of tremendous economic growth in recent decades. By presenting the real lessons of the Chinese developmental model, the book marks an important step forward for the law and development field.'

'This collection of essays on law and development in China is an especially timely contribution. China has recently emerged as the world’s largest national economy in terms of its gross national product, although as the world’s most populous nation, China ranks behind all of Europe, most of Latin America, and much of East Asia in terms of per capita income. The contributors include nine leading specialists of Chinese and comparative law from universities in Canada, China, Singapore, and the United States as well as two Brazilian scholars who add an especially cogent comparative perspective. They collectively question the applicability of the ‘Washington Consensus’ on the critical legal reforms necessary for sustained economic growth but differ in their varied perspectives on a ‘Chinese Model’ or a ‘Beijing Consensus.’ Provocative and insightful, [this book] is a must-read for those concerned with law reform and economic development.'

'The ‘Beijing Consensus’ has been a co-production of Left critics of the market-oriented Washington Consensus, Beijing’s insecure authoritarian leadership, and pundits eager for a sound bite to capture China’s complex political economy. The contributions to this volume do an excellent job of breaking down the ‘Beijing Consensus’ into concrete policy realms and helping us decide if there really is any there.'

'This excellent collection of essays shows that no clear ‘Beijing Consensus’ exists. Instead, the Chinese experience provides something even more interesting; its challenge to the ‘Washington Consensus’ invites reformers everywhere to engage in dialogue about the strengths and weaknesses of Chinese policies both for the future economic and political development of China itself and for reformers in other emerging economies.'

‘In this book, a distinguished international group of law and development scholars decomposes the idea of a Beijing Consensus by examining in detail the evolution of a number of areas of law in China, including tax law, property law, corporate law, securities law, and anticorruption law, with a view to addressing three key questions: How distinctive is the development trajectory of China’s legal system in these areas as compared to other legal systems? What accounts for China’s deviation from conventional models in these areas? If there is a distinctive general Chinese Model of development, or law and development, is this model replicable in other developing countries? In many important respects, the contributions to this book importantly advance debates about alternative development paradigms beyond unhelpful clichés or overgeneralizations through much more pragmatic evaluations of the relationship between law and development in particular social and political contexts.’