Home
At the Altar of Lynching

At the Altar of Lynching 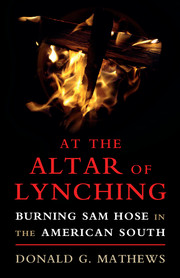 The story of a black day-laborer called Sam Hose killing his white employer in a workplace dispute ended in a lynching of enormous religious significance. For many deeply-religious communities in the Jim Crow South, killing those like Sam Hose restored balance to a moral cosmos upended by a heinous crime. A religious intensity in the mood and morality of segregation surpassed law, and in times of social crisis could justify illegal white violence - even to the extreme act of lynching. In At the Altar of Lynching, distinguished historian Donald G. Mathews offers a new interpretation of the murder of Sam Hose, which places the religious culture of the evangelical South at its center. He carefully considers how mainline Protestants, including women, not only in many instances came to support or accept lynching, but gave the act religious meaning and justification.

'With stunning research and uncompromising ethical vision, Donald G. Mathews shows why he is without peer in the history of religions. Every American should read this book, and learn how societies organize their racial superiority by religious means. Lynching is not a minor act conducted by marginal people. Lynching is an American institution used to reiterate the moral order of white supremacy.'

'Through this story, Donald G. Mathews masterfully explores the many political, social, and emotional forces that supported white racism and fuelled racial violence in the American South. More importantly, Mathews, a preeminent scholar of southern religion, illuminates the spiritual meaning of this violence. He has written a book that is, at once, erudite and gripping.'

'This is the book on southern lynching I’ve been waiting for. Through an analysis of one of the most notorious lynchings in the history of the South, Mathews shifts our understandings by revealing how much lynching was bound up - for both whites and blacks - with religious ideas of expiation, crucifixion, and sacrifice.'

'This book presents a searing and deeply personal story that probes the enduring legacies of Christian fervor and racial injustice in US History. Mathews does not look away in the face of racial violence, and neither should we.'

'Mathews has conducted a huge amount of primary source research, particularly in newspaper accounts and selected archival sources from the era, but he’s also able to draw on this newer secondary scholarship. The result is that most wonderful of things, a provocative and powerful interpretation, drawing from religious studies theories and scholarship, that is also completely grounded in the empirical realities of the time and place of the incident. That is, this is a beautiful and memorable blend of religious studies and history, with a powerfully original interpretation well-supported with empirical fact and astonishingly powerful prose.'

'Informed by deep archival research, a welter of scholarship on lynching, and literary theory, At the Altar of Lynching uncovers the underlying meaning of the melding of sacred ritual and carnival ribaldry in the brutal burning and dismemberment of a black laborer accused of crossing the segregating margin of white supremacy. Highly Recommended.'

'… Mathews has produced an important and provocative monograph that not only advances themes developed in recent scholarship but also develops new ones. At the Altar of Lynching should be indispensable reading for scholars of southern religious history, the history of lynching, and the study of American racism and racial inequality.'

'Mathews’s account examines the role of religion in justifying and legitimizing extralegal, ritualistic execution that often involved mutilation and torture. … Mathews’s dissection of the frightful autoda-fé gang murder and its bloody aftermath makes a compelling case for how all aspects of society coalesced to justify and maintain totalitarian control of the racial hierarchy, with religious faith often at the forefront.'