Home
After the Deportation 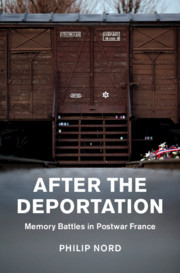 A total of 160,000 people, a mix of résistants and Jews, were deported from France to camps in Central and Eastern Europe during the Second World War. In this compelling new study, Philip Nord addresses how the Deportation, as it came to be known, was remembered after the war and how Deportation memory from the very outset, became politicized against the backdrop of changing domestic and international contexts. He shows how the Deportation generated competing narratives – Jewish, Catholic, Communist, and Gaullist – and analyzes the stories told by and about deportees after the war and how these stories were given form in literature, art, film, monuments, and ceremonials.

‘American historians of France strike again, as Philip Nord has powerfully unsettled our history. His book explains the evolving memories of resistance heroes and martyrs and victims of the Holocaust with unmatched political, intellectual, cultural and artistic subtlety.'

‘After Auschwitz, French survivors wrote poetry – and they staged plays, published memoirs, and built monuments – hoping to awaken minds and consign fascist barbarism to the past. In this riveting work, Nord brings their desperate efforts to life, and he does so with a moral urgency that is rare in any writing, prose or poetry.'

John Connelly - author of From Enemy to Brother: The Revolution in Catholic Teaching on the Jews, 1933–1965

‘A fascinating and sensitive exploration of France's memory wars over the wartime deportation of resisters and Jews, in which the resistance legend ultimately lost out to the Holocaust. New angles and new voices are constantly thrown up. A masterly work by a historian at the top of his game.'

Robert Gildea - author of Fighters in the Shadows: A New History of the French Resistance

‘The Germans forcibly deported about 160,000 people from occupied France during 1940-1944. While nearly all the 76,000 Jews among them perished, about half the others survived the camps. Philip Nord takes a fresh and probing look at how the French later reckoned with this searing experience.'

‘Philip Nord offers a fascinating account of the diverse ways France's wartime deportations have been remembered. For the first time, memoirs by Jews, Communists, Resistance figures and Holocaust survivors are considered together in an analysis that sheds new light on the polyphonic voices battling to recover history.'

Claire Zalc - author of Denaturalized: How Thousands Lost Their Citizenship and Lives in Vichy France