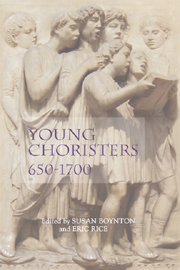 8 - Choirboys and Vicaires at the Maîtrise of Cambrai: A Socio-anthropological Study (1550–1670)

BY the end of the Middle Ages and during the Renaissance, Franco-Flemish polyphony had been established as a preeminent style throughout Europe, a splendid and immense repertory inaugurated by Guillaume Du Fay, who was trained in the choir school of the cathedral of Notre-Dame in Cambrai before beginning an international career in the most prestigious princely courts and other chapels (Milan, Florence, Rome). An ample bibliography attests to the interest historians have taken in this period and to musicologists' interest in the northern school. Since the development of the Franco-Flemish school is well known, I have chosen to study the period after the Council of Trent, focusing on sacred music, the most conservative tradition. What became of this brilliant institution? Why do most studies overlook the vast and complex subject of Franco-Flemish polyphonic sacred music beginning in the seventeenth century? Why and how was Cambrai forgotten? All these questions must be approached through the context of musical institutions and social structures.

At court and in urban centers, children from the social backgrounds most privileged by class or fortune received instruction in the arts as part of their intellectual formation at home – particularly in music, as instrumental performance was considered integral to the education of a respectable man. However, very few children were well-born; those from less affluent backgrounds could not pay for a private teacher but could still enter into the service of a church and join its maitrîse (choir school), which then assumed responsibility for them, providing room and board, thorough training, a comfortable standard of living, and a suitable career path.