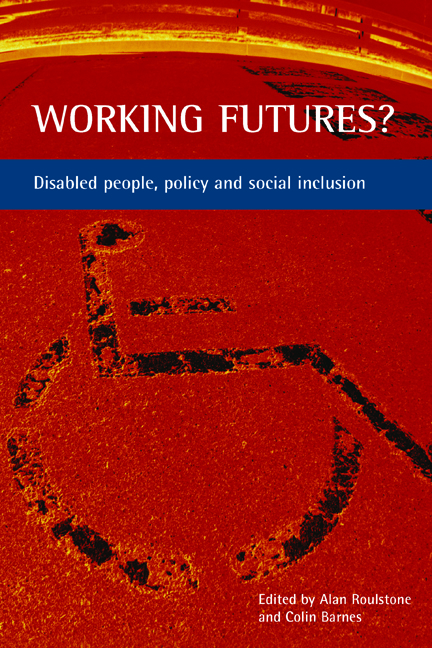 Few areas of social policy have received more attention than disability and employment policy during the lifetime of the New Labour governments (DSS, 1998; DWP, 2001, 2002a; PMSU, 2004, 2005). The urgency and weight of issues are illustrated in the myriad policy and programme changes that have taken place since 1997 (Burchardt, in Millar, 2003, pp 145-66). However, an essential paradox remains: how is it that, despite much policy effort in the UK to enhance the employment activity of disabled people, these efforts have not been reflected in significantly enhanced employment outcomes (Burchardt, 2000; ONS, 2002; Labour Force Survey, 2003; Stanley and Regan, 2003)?

A number of possible explanations can be posited for the continued difficulty in increasing disabled people's employment. First, policy solutions are essentially sound, but not fully or widely implemented. A related position might be that the coverage of a given policy, benefit or programme is uneven and a lottery of provision has prevailed. Alternatively, one could view the policy framework at a macro-level as essentially sound, but observe factors that severely militated against the effective application of a policy, for example labour market conditions (Beatty et al, 2000; Faggio and Nickell, in Dickens et al, 2003), structural benefit traps (O’Bryan et al, 2000) and perceptions and suspicion of state interventions (Drake, 1999; Roulstone, 2000). Perhaps more fundamentally, the view might be taken that disability and employment policy is premised on an inappropriate model of disability; that policy details and employment programmes may have failed or been severely weakened due to a misunderstanding of the ‘disability problem’ (Oliver, 1990; Barnes, 1991; Abberley, 1992; Saraga, 1998; Oliver and Barnes, 1998; Roulstone, in Barnes and Mercer, 2004, pp 18-34). Indeed, the historical predominance of a medical model in UK disability policy more widely is hard to dispute. All of these explanations may of course hold clues as the disability and employment paradox.