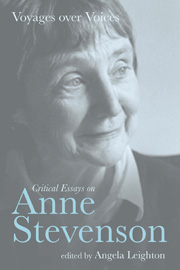 Anne Stevenson's elegy ‘Letter to Sylvia Plath’ (1988) is a curious performance. It hovers between conventional pastoral elegy, with its summoning of the natural forces of ‘English springs’ – the Grantchester willows, the Cam, the bull thrush shouting from the thicket – and rather cool assessment of Plath's poetic forces, as though sitting in judgement on the fragile and ferocious intensities of the dead poet's art. Clearly issuing in part from a complex sense of relief at the release from the grip of Plath's life story, after the agon of Stevenson's controversial biography, Bitter Fame (1989), the poem is streaked through with both admiration for ‘the fiercest poet of our time’, and an admonitory rhetoric that amounts to subdued rebuke, some lines inviting a belittling, even patronising tone (‘Poor Sylvia, could you not have been / a little smaller than a queen?’) in the tradition of critical elegies. Bitter Fame had been similarly bifold, at once celebratory of the poems with its lovely close readings, and moralising against Plath's surrender to her own temptations, her selfishness, her panicky sense of mission. The elegiac gesture in ‘Letter to Sylvia Plath’ is something of a broken one, for the reasons that the biography falls short: because the relationship with Plath was too close for comfort, a doubling of impulses in Stevenson that her poetics and critical sense could not quite control. But the very failure, I would argue, reveals something else: a charged engagement with a cluster of interrelated ideas: the double, the social forms of the maternal imago, the struggle for fame, which informs much of Stevenson's work as it did Plath's.