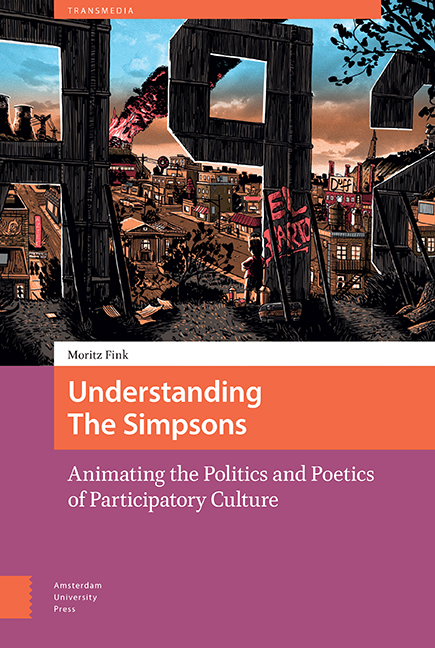 3 - More than Just a Cartoon: Meta-Television Culture and the Age of Irony

The cultural climate of the 1990s has rendered irony the dominant mode of both media consumption and production. This chapter highlights The Simpsons’ pivotal role as a TV show contributing to the cultivation of what I dub “meta-television culture” in reference to John Fiske's key work in television studies, 1987's Television Culture. More specifically, I argue that, by working elements of spectator culture into the parodic framework of an animated sitcom, The Simpsons has both tapped into and reinforced a cultural sensibility of meta-media humor, which characterized the zeitgeist of young adults in the 1980s and 1990s.

In his 2005 book, Everything Bad Is Good for You: How Today's Popular Culture Is Actually Making Us Smarter, Steven Johnson views The Simpsons as a prime example of how pop culture has become increasingly sophisticated and intellectually charged towards the end of the twentieth century. Referencing the fan-maintained online resource The Simpsons Archive, Johnson notes that the average Simpsons episode includes some eight movie-related gags such as a plotline, a line of dialogue, or a visual pun on some movie sequence (p. 223). Additionally, there are references to other elements of cultural history, such as TV shows and pieces of popular music. Similarly, as William Irwin and J. R. Lombardo note, “From the venerable name of ‘Homer’ to Lisa's ‘Howl,’ to parodies of The Raven, Cape Fear, and All in the Family, The Simpsons links itself to high culture and popular culture alike” (2001, pp. 81–82).

Hence, when The Simpsons started to take off from the late 1980s’ rather shallow media landscape, the series did not just captivate a growing loyal audience; commentators, critics, and scholars were likewise fascinated by the show. As Jason Mittell has observed, critics typically appraised the program's quality by distinguishing The Simpsons from earlier cartoon shows. Thus The Simpsons was declared to be “more than just a cartoon” by offering “intelligent comedy” which “appeal[ed] to adults as well as to children” (quoted in Mittell 2001, pp. 18–19). Perhaps even more than previous forms of “quality TV” (see Feuer, Kerr, and Vahimagi 1984; Thompson 1996), The Simpsons demonstrated that television and art do not necessarily preclude each other.