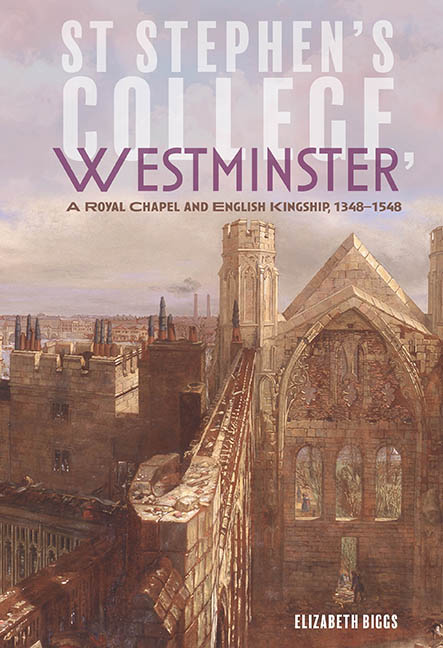 From its foundation in 1348 to the end of a legal dispute in 1394 St Stephen's College sought to define its purpose and its role within the king's palace at Westminster. Its foundation was very much a royal project of Edward III, but one that conflicted with the rights of Westminster Abbey within the manor of Westminster. The king intended that it be treated as one of the royal free chapels, traditionally set apart from the ordinary structures of the Church with their own jurisdictions and ecclesiastical and financial privileges. As a royal free chapel, the staff of St Stephen's expected to be allowed their rights, which would have given the college jurisdiction over all who lived within or worked at the Palace of Westminster as an extension of royal power. Founding a new institution required co-operation and goodwill from a variety of individuals both within and outside the Church, and then defining its place required litigation. It was devoted to the commemoration of the royal dead and, in adding to the permanent provision of worship within the king's palace, a display of royal piety to those who worked at or visited Westminster. Edward III founded the college as a chantry to pray for the royal family, but turning that idea into practical reality supported by a landed endowment and with the necessary agreements and privileges was the work of others, including his treasurer, William Edington, and the individuals who belonged to the college. The college's own canons played an important role in creating the financial and physical fabric that would be distinctively marked out as belonging to them, within the palace precinct. Instead of Edward's envisaged role for the college, however, twenty years of litigation with Westminster Abbey would confine its jurisdiction to simply its own staff and servants. The results of negotiation, high-handed assumptions, petitioning and lawsuits combined in 1394 to create an agreement that, along with the earlier statutes, would set the pattern for the college's existence for the rest of the Middle Ages. By 1394, the college had been the work of several generations of canons with royal support, and its interpretation and reinterpretation would continue until it was dissolved in the sixteenth century.