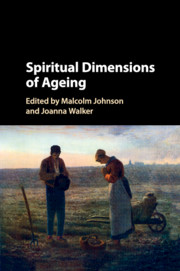 3 - Ageing and Spirituality across Faiths and Cultures

from Part I - The Spiritual Journey of Ageing

Spirituality becomes more important for many older people. For many, spirituality is largely associated with life meaning whilst for others, it has a specific religious dimension. Over the last couple of decades this has become an area of great interest, and anecdotes about spirituality in older adults are being replaced with research findings. The importance of understanding how the spiritual dimension is lived out in individual lives in multifaith and multicultural twenty-first century western countries is an important challenge for those who work with older adults. There is also increasing interest from within Asia regarding spirituality and ageing.

The spiritual dimension of life is a vital part of being human. It is from this spiritual dimension that the deepest issues of life meaning and relationship arise. Although people are not always aware of their spirituality, it is likely to come to awareness in times of both great joy and of great trauma and grief. Whilst this is true across the lifespan, matters of the spiritual dimension become more important to many people as they grow older, sometimes for the first time in their lives. For some this is an issue largely associated with finding life meaning and is fulfilled within a secular context; for others, it has a specific religious dimension. Viktor Frankl saw meaning as a crucial factor for survival and hope (1984).

This chapter briefly describes a model of spiritual tasks and process of ageing (MacKinlay 2001) designed to fit both theo-centric and secular modes of meaning-finding. The model recognises a central core of life meaning from which the person responds to life. This core or ultimate meaning is affected by and influences the person's sense of self-sufficiency and vulnerability, their life story, the importance of relationship and finding hope in later life.

The recognition of the universal nature of the spiritual dimension of human beings sets the scene for examination of this dimension, both within a religious and also from a secular perspective. A basic assumption for this chapter is that a person's spiritual dimension lies at the very depths of what it means to be human. The way that culture is experienced and the ways that religions and spirituality are expressed will vary according to regional and specific religious and cultural heritage and custom.