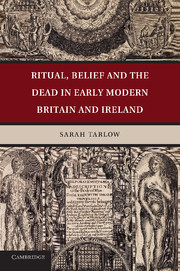 Ritual, Belief and the Dead in Early Modern Britain and Ireland
Buy print or eBook[Opens in a new window]

Distinct traditions developed in thinking and writing about the dead body in the early modern period. Theologians argued over the exact nature of bodily resurrection and the fate of souls of the unbaptised. Scientists and doctors were increasingly able to localise disease and ascribe medical causes to the failure of the body. Appropriate ways of distinguishing the bodies of criminals or nobles from the common herd or of marking the difference between men and women were discussed. Beloved bodies were wept over. Alongside all these kinds of belief-discourse, however, ran another discourse of belief about the body. Popular, often unwritten, sometimes incoherent folk belief or superstition not only constituted the basis of medical practice for many people of the British Isles, it also affected both scientific and religious practice throughout the period and into the modern age. In fact, scientific and theological discourses were often attempts at post hoc rationalisation of phenomena that were part of folk knowledge (such as the capacity of the touch of a hanged man's hand to cure cancers of the neck, or the definition of the numinous sith as an order between men and angels) rather than explanations of empirically witnessed observations.

The study of folklore is often overlooked by scholars interested in understanding the past in Britain, especially in England, despite the success of Keith Thomas's lengthy examinations of folk belief in early modern England (Thomas 1971, 1983), and more recently Ronald Hutton's wide-ranging social histories which have integrated folkloric evidence with other more orthodox sources of historical information (e.g. Hutton 1994, 1996). In contrast to many other European countries, there are few departments of English folkloric studies. Scottish and Welsh folklore are better established, and in Ireland folkloric studies have a rich and respectable pedigree and are still regarded as important to national identity and heritage. In England, however, folklore is still widely regarded as the province of local tourist guides, ghost walks and uncritical amateurs.