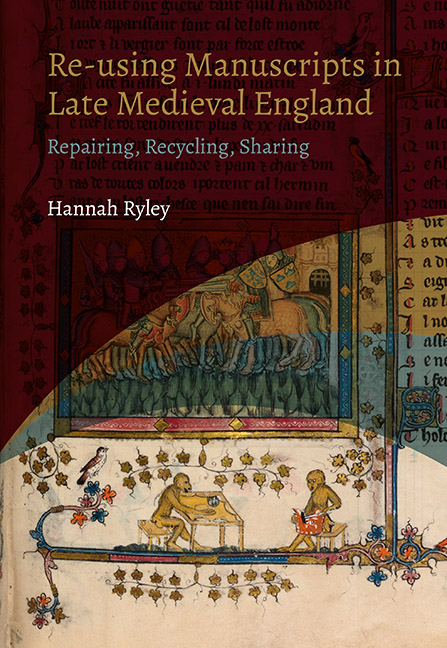 Sixteenth-century accounts describe parchment leaves that were ‘reserved of those lybrarye bokes, some to serve theyr iakes, some to scoure theyr candel styckes, and some to rubbe their bootes’. Leaves were also reportedly sent ‘to the grossers and sope sellers, and some they send ouer see to ye bokebynders […] at tymes whole shyppes full’. This chapter takes note of such destructive re-uses and focuses on the bits of books that came to be recycled in other books. The durable qualities of new parchment – as emphasised in Chapter 1 – enabled both the production and preservation of books, and in many instances relied on the re-use of older materials. Strikingly, medieval recycling of parchment in books is not fully explained by a straightforward evaluation of cost. In this chapter a more complex picture starts to emerge: books could impart and import recyclable parts, which were valued for their usefulness, material properties, and adaptability. As a result, these parts were re-used in myriad different ways, and possessed remarkable latent potential for multiple uses. This chapter asks: what values were associated with these varied uses and re-uses of book materials?

Recycling is ubiquitous in medieval manuscripts. After all, the very production of some book materials was predicated on recycling: as mentioned previously, medieval paper was usually made from recycled rags. Although fragments of fibre are sometimes visible in the fabric of paper, this form of recycling is not necessarily discernible to the eye. Yet, in this period, paper sheets were constituted of re-used fibres which had another form and a previous life. As discussed previously, the efforts taken to process rags into paper or skins into parchment resulted in added value for those materials. This begs the question: what was the value of the uses and re-uses of those materials thereafter? To continue this discussion, this chapter explores how and why value is added – or taken away – from book-materials by recycling. Some materials in medieval manuscripts are more tangibly recycled than others, such as flyleaves that bear writing, or visibly scraped palimpsests. Though these particular forms are noticeable today, recycled materials did not have to be overt for those working with books to know that they were there. Materials from books were often salvaged, redeployed or even destroyed as part of efforts to sustain books.