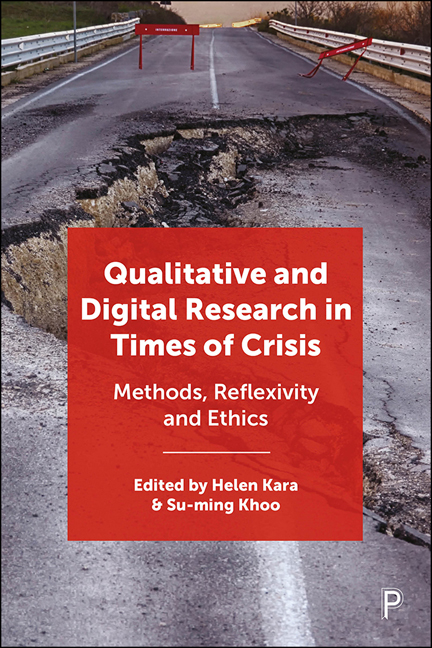 Qualitative and Digital Research in Times of Crisis
Methods, Reflexivity and Ethics

The move towards creative research outputs within academia has seen a recent and rapid uptake of mediums such as comics, zines, film, podcasts, and theatre to translate and engage the wider public in academia (Arevalo et al, 2020). These mediums can both be powerful and enlightening ways to communicate research findings, though they also come with distinct challenges (Hall et al, 2021). In this chapter we discuss the process and potential of communicating crisis research in creative forms, using the example of comics. More specifically, we draw upon our own experiences of developing creative research outputs and explore this process by looking at the comic, After Maria: Everyday Recovery from Disaster. This comic translates Gemma Sou's ethnographic research on how low-income Puerto Rican families recovered from the impacts of Hurricane Maria, which devastated the Caribbean island in September 2017. Our aim is to use the After Maria example as a means of developing critical discussions about the representational politics, pedagogy, and process of translating crisis research into comic form.

We argue that communicating crisis research via comics is a highly democratic process because it ensures your research is accessible to your participants as well as the wider public. Relatedly, the production of comics also enables a more participatory research process whereby participants can shape how their story is told. Comics are also uniquely positioned to produce a politics of representation that challenges reductive, dehumanising, and apolitical narratives about crisis-affected people that often circulate in mainstream media (Scott, 2014), and in academic research (Tuck, 2009). Furthermore, comics offer powerful rhetorical power as they are uniquely able to distil complex ideas into engaging and highly learnable forms (Chute, 2016).

We begin by outlining the communicative capacity of comics, before giving further details on the development of After Maria. We then detail practical issues, learning spaces, and representational challenges, before offering some conclusions.

A comic is generally an illustration that employs metaphor and/or storytelling to clearly communicate an idea to a broad audience (McCloud, 1994). Comics that centre on and tackle political, social, and economic issues are known as ‘serious’ comics.