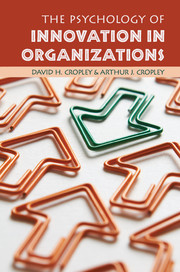 Although it was not directly inspired by him, this book has taken up an issue raised by Nussbaum (2013, p. 234) when he argued that “we need to switch from efficiency to creativity models” (emphasis added). In essence, this is what this book has done. It has drawn attention to a number of shortcomings or weaknesses in existing ways of conceptualizing innovation and has proposed a shift in focus to a more proactive and dynamic approach based on creativity theory. An overview of the kinds of shortcoming in current theorizing about innovation that are addressed in this book is presented in Table 10.1.

What Is the Practical Problem?

The practical problem has been stated clearly by a number of authors. In a nutshell, overwhelming lip service is given to the importance of innovation summarized in Chapter 1 and the litany of benefits it is thought to bring (see, for example, Table 1.1), but as Nussbaum (2013, p. 234) put it, it is “shunted to the periphery.” Such failure to innovate is now recognized as a matter of organizational life or death. The issue that thus arises is why firms choose to fiddle while Rome burns.

This book has shown that the problem has its roots in the three components of the system of which innovation is the outcome: the personal environment (see Chapter 4), the organizational environment, and the social environment (see Chapter 5). All three environments are marked by characteristics that support innovation, to be sure, but they are also marked by other characteristics that act as blockers of innovation (see Chapter 5). One blocker that cuts across environments is the absence of a clear understanding of the process of generation and implementation of effective novelty, for instance, equating the process with unfettered divergent thinking (see Chapter 2) or with something approaching divine inspiration. Another blocker is the inability of individual people, organizations, and societies to tolerate more than a limited amount of uncertainty or of risk (see Chapters 5 and 6, for example), whereas the essence of innovation is creating uncertainty, and one of its major drawbacks is that it is a risky business.