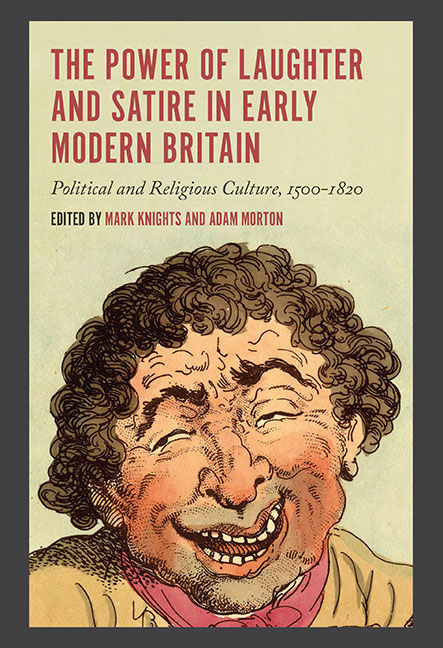 The Power of Laughter and Satire in Early Modern Britain
Political and Religious Culture, 1500-1820
Buy print or eBook[Opens in a new window]

7 - ‘Laughing a Folly out of Countenance’: Laughter and the Limits of Reform in Eighteenth-Century Satire

At the heart of this volume is the opposition between two terms, corroding and binding, between the capacity of satire and laughter simultaneously to subvert authority and confront iniquity while also solidifying communities of readers. Nowhere was this opposition more carefully, anxiously or contentiously studied than the golden age of English satire, between the restoration of the Stuart monarchy in 1660 and the deaths of Jonathan Swift and Alexander Pope in the middle of the eighteenth century. These debates targeted the nature of satire: what it was and what it was supposed to do. During this same period, a second philosophical dispute also opened up on the margins of literary, sociological and psychological theory about the nature and function of laughter. Both sides of these debates were eagerly and antagonistically argued: satirists were high-minded public moralists or they were vindictive lampooners; laughter was a form of splenetic superiority or merely a pleasing response to an innocuous incongruity.

This chapter is an attempt to trace those debates. But it is also an attempt to account for the ticklish relationship between satire and laughter more broadly from the perspective of recent psychological theories. In both eliciting laughter and solidifying communities, I claim, satirists were also offering a deeply affective experience for readers. According to most theorists then and today, satire was supposed to correct vice – either the vices of the satiric victim or those of the reader. But such a theory of satiric correction presupposes that readers and targets, having read a work of satire, will proactively apply the lessons of the work to themselves. Richard Morton has offered the pithiest articulation of this thesis: ‘The aim of satire was reformation through perceptive ridicule. The satirist saw what was wrong with the world; the reader reciprocated by agreement and amendment.’ Critics of satire, however, have had severe doubts, both then and today, that there is any simple or straightforward transaction between reading satire and reforming vice. Readers might have laughed at satiric works and their victims, but many questioned whether those chortles so readily translated into an easily imbibed lesson or practical self-correction.