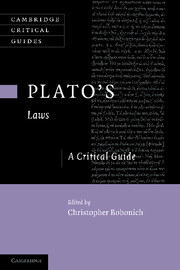 7 - Psychology and the inculcation of virtue in Plato's Laws

A PUZZLE ABOUT PHYSICAL EDUCATION

Although Aristotle says that Plato's educational recommendations in the Laws are pretty much the same as in the Republic (Politics II.6.1265a6–8), one striking difference in the Laws is its emphasis on a lifelong regime of gymnastics or prescribed physical movement: the Athenian says that pregnant mothers are to take exercise so that the fetus they are carrying is moved about (789a–93e); from the age of three to six, children must play at wrestling and dancing (814e–16e); thereafter, they are to dance (as well as sing) in the chorus of the Muses until the age of twenty, when they graduate to the chorus of Apollo (664c), in which they participate until they reach old age and retire to the chorus of Dionysus (653d, 665a, 666b, 670b, 812b–c). They also train in fighting (813d–e). But what is the value of all this physical activity? The answer to this question is surprisingly elusive, and trying to answer it takes us to the heart of the psychology of Plato's late dialogues.

Let us begin with two passages in the Laws that suggest a direction for our investigation. In the first, the Athenian is commending the practice of rocking distressed babies to calm them.

whenever mothers want their children to sleep when they are having trouble falling asleep, they bring to them not rest but, the opposite, motion, always shaking them in their arms, not in silence but with a song, exactly as if they were charming their children with flute-playing as in the cures of ecstatic Bacchics, using this dance of motion and the Muse … Both these affections [viz. the crying child's and the Bacchics'] are fear, and fear comes through some bad disposition of the soul. […]