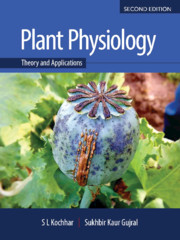 Preface to the First Edition

Our earlier book, Comprehensive Practical Plant Physiology, was first published in 2012 and was very warmly received by students and teachers alike. In a large measure, the book succeeded in generating a lot of interest amongst students and scholars alike, in the field of Botany and Agricultural Sciences. However, the readers have urged us to restructure the text and update the information so that the book becomes self-contained in itself, matching other leading titles in the field of plant physiology.

During the course of reorganisation, we were greatly influenced by the feedback reviews we received from the many experts based within the country and in Southeast Asia, as well as the suggestions offered to us by the editorial staff at Cambridge University Press, India. We are much pleased to present to our readers an altogether new book, in which we have ensured a continuous flow of information so that the readers can assimilate the knowledge without too much effort. The material is presented in a concise and lucid manner, so that the readers can comprehend the conceptual complexities, come to know about the recent achievements in the field, and share the joy that we feel for this subject.

Salient features of this edition are as follows:

In addition to the generalized and well-informed textual content in each chapter, we have attempted to highlight the important information through models and flow charts; such as the information in the chapter on ‘growth and development’ regarding various topic like, mode of action, physiological role, biosynthesis and inactivation of auxins, gibberellins, ethylene, and abscisic acid. The role of the recently discovered hormones such as jasmonates, polyamines, salicylic acid and nitric oxide, etc., has also been emphasised upon appropriately. The mode of action of phytochrome-mediated responses based on their requirements such as LFRs, VLFRs and HIRs, also finds a special mention. Included also in the discussion is the work on Arabidopsis thaliana as an experimental tool and model system for research in genetics and molecular biology, enumerating its advantages over other plant materials. We have also included a discussion on Reactive Oxygen Species (ROS) and Asada-Halliwell or Ascorbate-Glutathione Pathway in the chapter ‘Stress Physiology and Secondary Metabolites’.