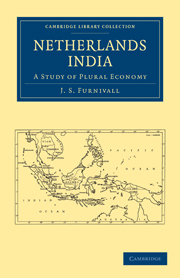 1. Fall of Van den Bosch. By 1850, the succession of famines in India, the stagnation of production and consumption, and the slower rate of increase of the European population were all signs that the impulse to production given by the Culture System was fading; but new developments in the Netherlands, in shipping, commerce and manufacture, showed that private enterprise was ready to take its place. The Culture System was passing, not because it failed, but because it succeeded, and not because of distress in India, but because of a new balance of power at home; it had achieved all that Van den Bosch had promised, in Europe as well as in the East. In India few could, or dared, criticize it, but in the Netherlands it had called into existence a politically-conscious Liberal middle class, increasingly dissatisfied with the financial administration, first in Europe and then in the Colony; this class aimed originally at obtaining the power of the purse at home and, later, at obtaining control over colonial profits. During the period of transition there were three stages: (i) Liberal Opposition to the Crown (1840–48); (ii) Liberal Opposition to the Colonial Government—the“Colonial Opposition” (1848–62); and (iii) the triumph of Liberalism (1862–70).

In 1815 the Dutch had willingly given William a blank cheque, and, up to 1830, even his lavish expenditure did not shake their confidence; but when, after eight years of war and an addition of f. 300 million to the burden of debt, he was compelled in April 1839 to arrange terms with Belgium rather less favourable than he could have had in 1830, his people were more critical.