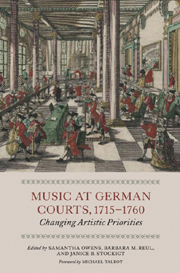 THIS VOLUME — first conceived in early April 2005, when the three editors presented papers at the conference held during the 9. Internationale Fasch-Festtage (Ninth International Fasch Festival) in Zerbst/Anhalt, Germany — is the outcome of a round table titled ‘Changing Artistic Priorities of German Hofkapellen, 1715–1760’, given during the Twelfth Biennial International Conference on Baroque Music in Warsaw (2006). Michael Talbot, chairperson of the session, suggested we publish and enlarge our findings, and in the months that followed the basic structure and contents of the book gradually emerged, as we approached potential authors and received their reactions to the project. John Spitzer and Neal Zaslaw's excellent book on The Birth of the Orchestra (Oxford University Press, 2004) had filled many previous gaps, but we wanted to provide English-speaking readers with a series of detailed case studies of German Hofkapellen based on a close reading of archival sources. The final selection, a mixture of fifteen Protestant and Catholic courts of varying sizes with different artistic priorities, was largely dependent upon the willingness of scholars to share the results of their archival research, and, of course, in the first instance on the existence of relevant primary source material.

This book would not have been published without the encouragement and advice of Michael Talbot, together with the support of Peter Holman and Wolfgang Ruf, especially during the planning and preparation stages. We are also grateful for the direct financial assistance received from the Faculty of Music, the University of Melbourne, Luther College, University of Regina, and Jane Hardie, on behalf of the Network for Early European Research, funded by the Australian Research Council.