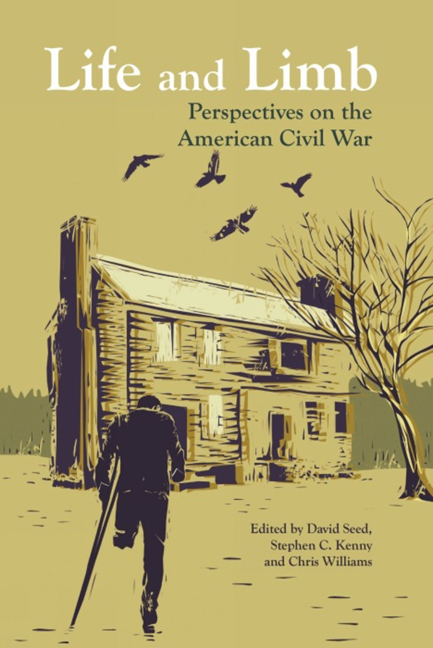 Life and Limb
Perspectives on the American Civil War

Mick Gidley
Affiliation:
Emeritus Professor of American Literature and Culture in the School of English at the University of Leeds

As soon as the Civil War broke out, photographers were on the scene. Mathew B. Brady, the leading photographic entrepreneur of the time – someone who in his project to produce and sell a Gallery of Illustrious Americans (1850) had already demonstrated the medium's capacity to intersect with history – set off, with assistants, alongside part of the advancing Union army. One of the stories that soon attached itself to his name – he assiduously promoted such tales – is that in the confusion of the early indecisive battle now known as Bull Run (1861) he was lost in the woods for three whole days. On Brady's return to New York, the newspapers claimed that he had salvaged from his wanderings a trove of exact transcriptions of the battlefield – but, if he did, none survived. In any case, his eyesight had so deteriorated by this point that it is unlikely he took such pictures himself. He also sent operatives into the field equipped with dark-room wagons, their cameras, chemicals, and plates aboard, ready to make wet-plate images, and much of these photographers’ output was copyrighted and circulated under Brady's name. Throughout the war, and for a while afterwards, he mounted exhibitions of such photographs in his Manhattan gallery.

It is important to realize that, primarily for technical reasons, the battlefield photographs were not made during the heat of combat. They were taken days, weeks, sometimes months after the fighting at that location had ceased. The resulting images are not so much records of events as reflections upon events. Sometimes the composition itself tells us this. The well-known view (initially attributed to Brady but actually taken by one of his assistants) often titled ‘McPerson's Woods – Wheatfields in which General Reynolds was Shot’ shows Brady himself surveying the Gettysburg battlefield scene in 1863. He acts as a surrogate viewer: we look at him – tellingly across a reflecting pool – as he contemplates the spot where a sniper's bullet took down the Union commander John Reynolds (see Plate 11). We fill the prospect with our thoughts. Uncaptioned, this image would constitute a rural scene, but its title animates it differently. To their original viewers, such landscapes were haunted by the deadly events that had occurred there. All of the photographs we are considering here were an aftermath of the war.