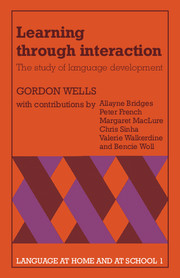 ‘The faculty of language stands at the centre of our conception of mankind: speech makes us human and literacy makes us civilized.’

In the child's linguistic development, there are three major phases. The first is characterised by the discovery of language, as patterns of sound take on meaning and purpose in the repetitive activities that play so large a part in the infant's interaction with his parents and other primary caregivers. In this phase, during which the infant simultaneously discovers his own separate identity and his ability to bring about changes in the people and objects that make up his environment, language functions first and foremost as a means for the regulation of activity and interaction. Then, as objects and events in his environment, and his own and other people's activities within this environment, are made the focus of conversational attention, he gradually discovers a further important function of language – that of representing, or standing for, the objects and events that make up his experience.

The second phase is one of consolidation and diversification. Through his participation in the talk that directs and interprets the variety of events that constitute everyday life, the child gradually takes over the language of his community and, in the process, absorbs the cultural values and working assumptions that are encoded in that particular community's use of language. He also begins to gain control of a variety of different language registers, as he learns to adjust his style of speaking and listening to the requirements of the social context – the participants, the setting and the task in hand.