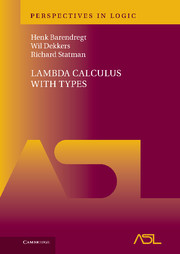 This book is about lambda terms typed using simple, recursive and intersection types. In some sense it is a sequel to Barendregt (1984).That book is about untyped lambda calculus. Types give the untyped terms more structure: function applications are allowed only in some cases. In this way one can single out untyped terms having special properties. But there is more to it. The extra structure makes the theory of typed terms quite different from the untyped ones.

The emphasis of the book is on syntax. Models are introduced only insofar as they give useful information about terms and types or if the theory can be applied to them.

The writing of this book has been different from the one on untyped lambda calculus. First of all, since many researchers are working on typed lambda calculus, we were aiming at a moving target. Moreover there has been a wealth of material to work with. For these reasons the book was written by several authors. Several long-term open problems have been solved during the period the book was written, notably the undecidability of lambda definability in finite models, the undecidability of second-order typability, the decidability of the unique maximal theory extending βη-conversion and the fact that the collection of closed terms of not every simple type is finitely generated, and the decidability of matching at arbitrary types of order higher than 4. The book has not been written as an encyclopedic monograph: many topics are only partially treated; for example, reducibility among types is analyzed only for simple types built up from only one atom.