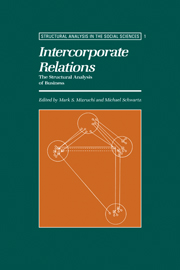 8 - The articulation of power and business structures: a study of Colombia

By approaching business structure as a component of social structure, the present chapter analyzes the hegemony of business in the local and regional development of a Latin American nation (Colombia), as well as the relationships between public and private (business) elites. In the-authors' view these are critical issues for the structural analysis of business, in particular in developing nations, and represent a needed complement to approaches centered upon economic concentration and market structure, the role of foreign investment, and internationalization of capital or corporate structure.

This chapter is part of a research project on power structure, class and economic development in the mid-seventies, carried out by the authors in urban Colombia. It covers eleven Colombian cities in the 100,000–500,000 population range. We begin by sketching the outlines of Colombian political economy. We then discuss the background of the study of business and power structures in Latin America, and in Colombia in particular, and the conceptual and theoretical orientations of the present research.

Empirical results are then examined in four parts: the class basis for the composition of the power structure; the fractions within business; the concentration of power in terms of interlocking directorates; and the cleavage of public and business sectors. The final section presents our general conclusions.

Some features of Colombian politics and economy

Located in the northwest corner of South America, Colombia is the third most populous country in Latin America, ranking behind Brazil and Mexico. In 1983 it had a population of 28 million. Its 1,141,748 sq. km. area exhibits important regional variations which reflect geographical, economic, and historical differences (Fajardo, 1978; Jaramillo, 1983: 191–4).