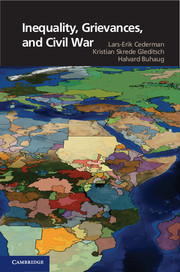 Inequality, Grievances, and Civil War
Buy print or eBook[Opens in a new window]

Apart from acquiring real estate, there are few things that make you more indebted than writing collaborative monographs. Indeed, this book is the product not only of our own efforts, but also those of our colleagues and students who made major contributions in terms of conceptual development, data collection, software development, and analysis. In this very respect, the book falls somewhere between a co-authored book and a co-edited volume.

More than anything else, this book is the fruit of several years of intense research collaboration involving a tight network of conflict researchers in Europe. These activities started as an informal network that we labeled Geographic Research On War Network (GROWnet), which originally included colleagues at the Peace Research Institute Oslo (PRIO) and the Norwegian University of Science and Technology in Norway, ETH Zürich and University of Geneva in Switzerland, and the University of Essex in the United Kingdom, and was subsequently extended to collaborators at Uppsala University in Sweden. Within this context, we have published a large amount of co-authored research, with an author list featuring every possible combination of the three authors of this book and beyond. Some of the research paving the way for the book was funded by an ECRP grant on “Disaggregating Civil War” (06ECRPFP004) awarded by the European Science Foundation, 2007–10, through individual grants from the national research councils, that is, the Research Council of Norway (182399), Swiss National Science Foundation (105511–116795), and UK Economic and Social Research Council (RES-062–23-0259). Gleditsch also acknowledges support from the Research Council of Norway (180441/V10). As of the summer of 2012, the network received new funding from the European Union as a COST Action (IS 1102), which will allow it to expand its activities to many more partners in Europe under the heading of the European Network of Conflict Research (ENCoRe).