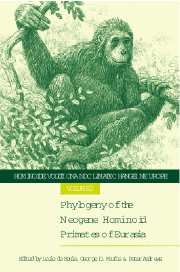 Rarely have functional inferences been as significant to phylogenetic reconstructions as in the case of Sivapithecus. Although fossils now considered to be Sivapithecus were once thought to be hominid ancestors, the discovery of a facial skeleton (GSP 15000) attributed to Sivapithecus provided strong evidence of an exclusive relationship with Pongo because of a suite of shared, derived traits (Pilbeam, 1982; Ward & Kimbel, 1983; Ward, 1997b). However, the discovery of Sivapithecus postcranial remains, notably two humeral shafts, cast doubt on these relationships (Pilbeam et al., 1990). The anteriorly-convex and medially-concave humeral shaft morphology of these fossils revealed that the orang-utan-like face of Sivapithecus is combined with a pronograde quadrupedal skeletal design unlike that of extant apes. Pilbeam et al. (1990) posited that the fossil evidence is consistent with two phylogenetic scenarios, each requiring a considerable amount of homoplasy. First, Pongo and Sivapithecus may be sister taxa, in which case many postcranial features shared among extant hominoids must have evolved in parallel (Figure 15.1A). Secondly, Pongo and Sivapithecus may not form a clade, in which case the similarities in the face and palate are convergently derived or primitive for great apes (Figure 15.1B). A scenario in which the palatal and facial similarities are primitive for great apes requires subsequent reversals in extant African apes and humans. A third possibility, that Pongo and Sivapithecus are related and that the supposed primitive post-cranial features are in fact reversals from a more modern ape-like condition, was considered by Pilbeam et al. (1990) to be unlikely in the light of postcranial similarities between Sivapithecus and other fossil hominoids such as Proconsul and Equatorius (formerly Kenyapithecus africanus; see Ward et al., 1999).