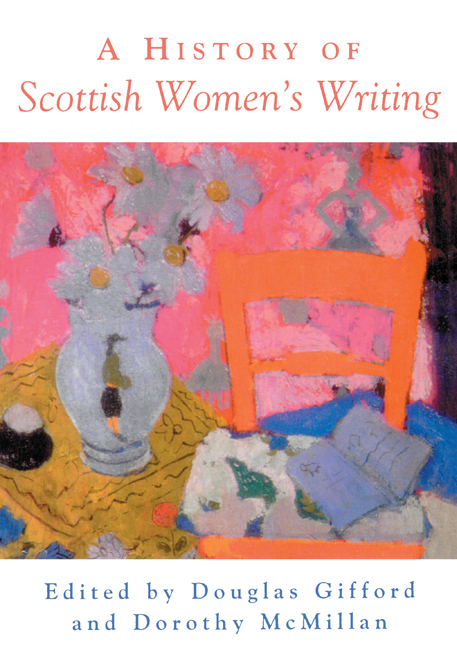 A History of Scottish Women's Writing

John Any-Body would have stood higher with the critics than Joanna Baillie.

The women of the nineteenth-century Scottish stage are varied, little known and undervalued. Yet it is, of course, the case that women populated all aspects of this vital phase in Scottish theatre history. As actresses, managers and playwrights they were most influential, but they also occupied the stage as singers, dancers, musicians and acrobats, as well as being engaged as historians and critics and they were, of course, consumers of theatre as members of the audience and as readers of plays. This chapter can only begin the process of recovering the particular influence effected by women on the Scottish theatre in the nineteenth century and, in the context of a study of Scottish women's writing, the focus must be on the playwright - although I will also consider some of the dominant representations of women on stage in contemporary drama.

The study of Scottish theatre can be a frustrating thing, equally neglected by theatre scholarship and by Scottish studies. However, influenced by Alasdair Cameron's groundbreaking historical scholarship (as well as his endless enthusiasm for the subject), its depth, its complexity and its social, cultural and economic influences are finally being recognised and studied, and the nineteenth century is proving to be one of the richest of seams for new researchers. Cameron, Christopher Worth and Barbara Bell have all argued for the National Drama as the Scottish genre of the period, each convinced of its centrality in any understanding of the period's theatre. In addition, the significance of the popular tradition is generally agreed upon and has begun to be interrogated seriously in some recent work in the field While much remains virgin territory a key point seems won: that the nineteenth-century Scottish theatre is by no means homogeneous; that it can neither be reduced solely to the National Drama nor just to the popular tradition; that it has many diverse guises, which together create a unique and fertile environment for exciting theatre activity.