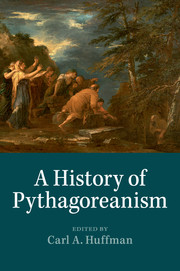 We know very little about Diogenes Laertius as a person. One recent hypothesis is that his surname refers to his birthplace (the city of Laerte in Caria or Cilicia), but other interpreters prefer to think – on the basis of a controversial indication in his text – that he was born (and lived) in Nicaea in Bithynia; it is also generally admitted on the basis of the scanty and mostly negative internal evidence that he lived and worked at the beginning of the third century AD: the last philosophers he mentions are Sextus Empiricus (active c. 190 AD) and his disciple Saturninus, and the most recent source he refers to is Favorinus of Arelate. This approximate date helps us appreciate the chapter he devotes to Pythagoras at the beginning of Book 8 of his Lives (as I shall abbreviate the work known as Lives and Opinions of Eminent Philosophers), for it allows us to relate Diogenes’ treatment of Pythagoras to two philosophical movements deeply indebted to Pythagoreanism, i.e. Neopythagoreanism and Neoplatonism.

Neopythagoreanism, which goes back to the first century BC, must have still been vigorous during Diogenes’ lifetime. Thus, the fact that his own presentation of Pythagoras does not appear to be indebted to Neopythagoreanism is certainly significant, even if what this is significant of is more difficult to assess. Geographical marginality is probably not a good explanation, because Diogenes’ erudite work suggests – even if his actual sources are certainly fewer that those which are quoted – that he had access to a major library, perhaps that of Alexandria. It may also be that Diogenes Laertius was simply not interested in contemporary developments and more specifically that the Pythagoras of Neopythagoreanism, who is hardly more than a Platonizing-Aristotelianizing doctrinaire, was not especially attractive to him. As a matter of fact, one of Diogenes’ interests lies – as the title of his work indicates – in the person of any given philosopher.