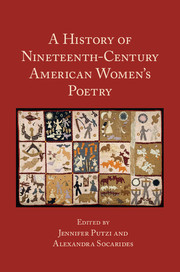 22 - Women Writers and the Hymn

Though it seldom receives attention from literary scholars, the hymn was the most popular poetic form of the nineteenth century, as it was the primary medium in which a great many Americans engaged with and experienced poetry. Though hymns had long been acceptable reading material for private religious devotions, they were for centuries prohibited from inclusion in mainline congregational worship on the grounds that lay-authored religious lyric might promote questionable doctrines and undermine clerical authority. This ban became increasingly tenuous in the early nineteenth century amid the meteoric rise of Methodism, a denomination that attracted an enormous following in part because of its promotion of congregational song as well as its populism, lively revival meetings, and rejection of the Calvinist doctrine of predestination. After losing both cultural relevance and thousands of members to Methodism, mainline Protestant denominations attempted to remain viable by reluctantly sanctioning the inclusion of hymns in public worship – a decision that did little to prevent the ascent of Methodism but that nevertheless imparted new legitimacy and respectability to hymnody. Following this official benison, hymns flourished throughout the nineteenth century, a period that became a veritable golden age for this devotional poetic form.

Authored by amateurs and professionals alike, hymns circulated in both conventional and unconventional literary venues. Hymn lyrics were often first published as poems in periodicals or poetry collections, where they were discovered by hymn editors, and they were frequently interpolated in nineteenth-century religious novels, as with the inclusion of hymn lyrics in such novels as Susan Warner's The Wide, Wide World (1850) and E.P. Roe's novels Barriers Burned Away (1872) and The Earth Trembled (1887). Hymns circulated most widely, however, in such religious venues as the hymn book, the denominational hymnal, and the hymn collection, which was among the most popular printed forms of the century and which sold in astounding numbers unrivaled in the world of mainstream literary publishing. For example, Ira Sankey and Philip Bliss's famed collection Gospel Hymns and Sacred Songs (1875) sold well over a million copies in the United States alone; together with its sequels, it sold over 50 million copies. Beyond the world of print, hymns circulated through oral performance in worship services, and in that setting they reached those who otherwise had little contact with published poetry: the working classes, rural and frontier people, slaves, and the illiterate.