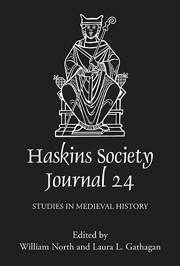 3 - The Material and the Visual: Objects and Memories in the Historia ecclesiastica of Orderic Vitalis

A string of recent publications has sought to emphasize the relationship between the memorial and the material in the medieval period. Drawing on this body of work, this essay explores the dynamic relationship between physical objects and the memories associated with them in the Historia ecclesiastica of Orderic Vitalis. Written between c. 1114 and 1141 at the abbey of St Evroul, located in the pays d'Ouche on the southern frontier of Normandy, the massive thirteen-book Historia is widely recognized by scholars as being one of the most important sources for the history of the Anglo-Norman world and beyond, and it has been the subject of much study since the 1950s. Whilst it is a well known fact that Orderic drew on a large number of written and oral sources in the writing of the Historia, the exact role played by the material and the visual in this process has remained largely unexplored. The focus of this article is thus on the way in which these objects are described in Orderic's narrative and the implications of this for our understanding of the Historia as a whole.

Leonie Hicks has recently highlighted ‘the visibility of the past’ as an important theme in historical writing, observing that for the Anglo-Norman chroniclers, ‘monuments and places … were much more than just illustrations to or diversions from the main narrative: they were in fact integral to the message they were trying to convey'. Thus, while such descriptive passages are interesting in and of themselves, the purpose of examining this largely unexplored aspect of Orderic’s magnum opus here is to highlight the textual richness of the Historia and to demonstrate what these passages reveal about the purpose of its narrative. For the more one studies Orderic, the more one notices passages concerning objects that he claimed were still in existence at the time of his writing, such as a memorial roll, a Psalter, and a stone arch.