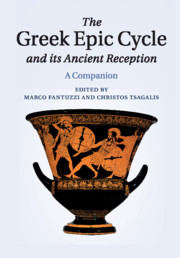 Overlaps between Pindar and Cyclic Epic

Most choral songs of the sort composed by Pindar included a narrative based on the established themes of Greek mythology (usually a unique one for each song), or at least brief mythological references. The subjects were most often ones belonging to Panhellenic or common-Greek traditions; ones of purely local interest and disconnected from Panhellenic tradition are rarer. Since the Trojan and Theban Cycle are primary repositories of such myths, it is no surprise to find that there are many overlaps between choral narratives and the Epic Cycle, as indeed there are with the Hesiodic Catalogue of Women. Obviously, an overlap does not in itself prove borrowing, or that Pindar knew the Cycle.

The Trojan Cycle is well represented in Pindar, particularly when he is composing for victors from Aegina, in whose mythology the Aeacidae play a major role. Overlaps with the Cypria include: the wedding of Thetis and Peleus; perhaps the infancy of Achilles, and his being raised by Cheiron; the conflict between the Dioscuri and the Apharetidae (see below); the battle with Telephus in Teuthrania during the first and abortive expedition, where the military cooperation between Achilles and Patroclus was first displayed; and Achilles’ slaying Cycnus the son of Poseidon early on in the war. Another striking overlap with the Cypria can also be found in the Odes of Bacchylides, whose short Ode 15 has as its subject the ‘Demand for Helen’ made by Menelaus and Odysseus, when they were protected by Antenor and Theaino. Overlaps between the Aethiopis and Pindar include the killing of Memnon, the mourning for Achilles, and his immortalization on the White Island. Here too belongs the suicide of Ajax, apparently dealt with in both Aethiopis and Ilias parva; a scholiast discussing Pindar's account of it at Isth. 4.35–9, and his specification that it happened ὀψίᾳ ἐν νυκτὶ, says that if this phrase means ‘in the last part of the night’, i.e. just before dawn, this is parallel to the account in the Aethiopis (PEG F 5 = F 1 D. = F 6 W.).