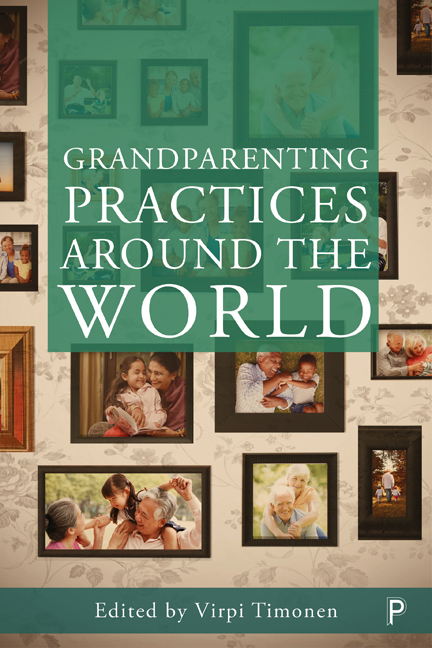 Grandparenting Practices around the World

For decades, a great deal of research on grandparenting has focused on grandmothers. They have been thought of – either explicitly or implicitly – as the principal grandparents, whereas grandfathers have been largely seen as ‘peripheral figures’ in the lives of grandchildren and family life in general (Mann, 2007, pp 281–2). Recently, there has emerged a burgeoning interest in grandfathering in contemporary family research. Population ageing increases the time span for grandparenthood, which today can last several decades. Therefore, grandparenting has become a much more common practice for older men, too.

Recent qualitative research (for example, Mann et al., 2016; Mann and Leeson, 2010; Roberto et al., 2001; Sorensen and Cooper, 2010; Tarrant, 2012, 2013) on grandfathers’ own perspectives has aimed to depart from the image of grandfathers as distant heads of family, assistants to grandmothers and entertainers rather than caregivers – ideas that were prominent in earlier research. This shift towards viewing grandfathers as active, independent and gendered actors instead of mere auxiliaries to grandmothers has also underlined the importance of studying heterogeneity among grandfathers and the intersecting factors behind it. Grandfatherhood and men's grandparenting practices are shaped by both intergenerational relations and processes related to class, place, age, generation, grandchildren's age and marital status, among other factors. Furthermore, societal structures such as welfare state systems and how society supports families (especially women through provision or financing of childcare) impact on expectations regarding grandparenthood and grandparenting practices, and thus on cultural norms.

In this chapter, our focus is on class-based features of grandfathering in the context of a Nordic welfare state. Based on face-to-face, open-ended interviews with 17 Finnish working- and middle-class grandfathers aged 50 years and over, we explore how these men talk about their relationships with their grandchildren, their grandfathering practices and grandfatherhood, and how these descriptions are structured by class cultures and models of class-based masculinities.

Grandfatherhood has been considered to include paradoxical features (Davidson et al., 2003, pp 178–9). On the one hand, grandfatherhood is an opportunity for men to form new and close relationships with children in the family. Especially grandsons are thought to provide men with an access to emotionality, and to create closeness that men rarely experienced with their own children as fathers due to working long hours (Davidson et al., 2003, p 179; Sorensen and Cooper, 2010, p 132).