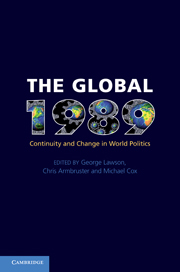 10 - A dangerous utopia: the military revolution from the Cold War to the war on terror

For four decades, the Cold War was characterised by military competition. The race for dominance on land, at sea, in the sky, in space and in the strategic nuclear arena punctuated this competition, which found public expression in Soviet May Day parades and NATO's REFORGER exercises. After a stand-off of unprecedented length, the Soviet Union abruptly abandoned the competition (1987), watched its client states shift allegiances (1989), and finally disintegrated (1991). With the Soviet Union's demise, the United States intervened with increasing confidence in foreign conflicts and entertained the belief that military power could reshape the international order.

Given the centrality of military competition to the Cold War and the change in the balance of power that characterised its end, it is natural to question the role military developments played in the Cold War's denouement and the shaping of the post-Cold War world. In this context, a theory has emerged, which can be termed the military revolution hypothesis, that links developments in weaponry with the demise of the Soviet Union and the rise of US primacy.

According to military professionals and defence intellectuals, a military revolution has been underway since the 1970s. The core of the military revolution is a set of new technologies that permit armed forces to locate a large number of targets and destroy them precisely at long ranges. Key to the revolution are developments in precision guided munitions (PGMs), digital networks, long-range sensors, reconnaissance systems, unmanned aerial vehicles (UAVs) and stealth technologies.