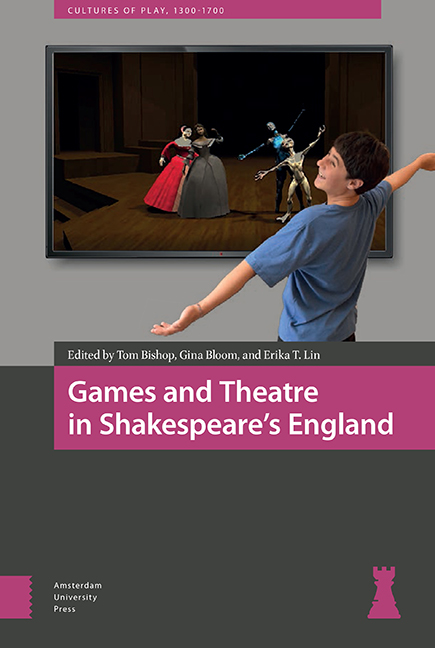 This introduction expounds the historical and theoretical overlaps between games and theatre by analyzing how playing crucially links these phenomena. The early modern English stage is an ideal locus for exploring that intersection, given its cultural significance as ludic entertainment and its ongoing impact on gaming today. We contextualize these issues by examining scholarship on play, from Huizinga and Caillois to more recent work; by centering aspects of drama beyond mimesis and situating these within theatre and performance studies; and by articulating how theatre challenges games as rule-bound systems. We conclude with an overview of the volume's three sections, respectively on the history of early modern games, the incorporation of games into stageplays, and Shakespearean drama's legacy in contemporary videogames.

In the final scene of Shakespeare's Love's Labor's Lost, two simultaneous but unequal games are played, one by the Navarrese lords and one by the ladies of France they are wooing. The King of Navarre and his three lords, who have sworn to seclude themselves from society, disguise themselves as Muscovites, aiming to visit the ladies unrecognized so as not to be scorned for breaking their oath. The ladies of France, tipped off, put on masks and trade love tokens so that each of the men unwittingly swears devotion to the wrong woman. The lords are players in the masquing tradition in which men wearing fantastical costumes would court their beloveds in disguise. The ladies, too, become players when they “change […] favors,” a phrase referring simultaneously to exchanging physical badges or markers and to altering their faces by wearing vizards. The men's game of deception is outdone by the women, whose counter-game of misdirection one-ups theirs. At the end of the interlude, after all is revealed, the lords, suitably humiliated, bring on the clownish pageant of the Nine Worthies, for “’tis some policy/ To have one show worse than the King's and his company” (5.2.512–513).

This episode captures some of the myriad fascinations and challenges that lie at the intersection of games and theatre. In Shakespeare's stageplay, the masque of Russians and the ladies’ counteraction are imagined as a kind of competitive recreation.