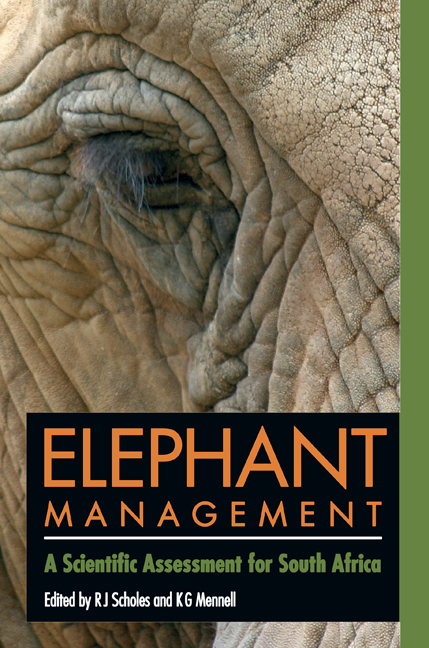 Chapter 4 - Interactions between elephants and people

MOST PRESENT-DAY interactions between elephants and people in South Africa occur within conservation areas, and are predominantly positive. However, human–elephant interactions in Africa have received increasing attention in the scientific literature in the last decade because of a perceived rise in levels of conflict between the two (Hough, 1988; Thouless & Sakwa, 1995; Tchamba, 1996; Naughton et al., 1999; O'Connell-Rodwell et al., 2000; Dublin & Hoare, 2004). Important advances have been made in researching, responding to, and reducing conflict between elephants and people across the continent (Hoare, 2000; Dublin & Hoare, 2004; Sitati, 2007), and are discussed later in this chapter. However, the ‘conflict paradigm’ (Lee & Graham, 2006) has presented an unbalanced perspective on the way elephants and humans interact by overlooking positive interactions. This chapter seeks to redress this oversight by additionally assessing a range of positive types of interactions, such as between tourists and elephants.

Because human–elephant conflict (HEC) is a highly emotive and politicised issue, it is reviewed in this chapter in detail. The attention it receives is not meant to reflect the current scale of the problem in South Africa. Rather, it provides a comprehensive assessment to aid formulation of policy in the current context, while recognising that HEC could become an increasingly important political issue in South Africa with the expansion of conservation areas, growing elephant populations, a burgeoning tourism industry, and greater participation by rural communities in resource management.

Elephants and people have interacted in Africa for thousands of years. Humans have preyed on elephants since the Stone Age, as evidenced by rock art depicting elephant hunts (Carrington, 1958). However, the advent of cultivation probably changed the relationship between the two species from one of ‘a mild predator/prey interaction’ to one that was ‘fundamentally competitive’ (Parker & Graham, 1989). Humans and elephants have the same habitat preferences, and this would have given rise to localised competition between the two for space, probably resulting in elephants raiding people's crops from time to time (Parker & Graham, 1989). It has been speculated that wide stone walls constructed around ancient villages may have been to deter crop-raiding elephants (Clutton-Brock, 2000). However, some indirect interactions between elephants and people in pre-colonial times were also positive. Localised bush encroachment caused by overgrazing by livestock may have favoured elephants (Parker & Graham, 1989).