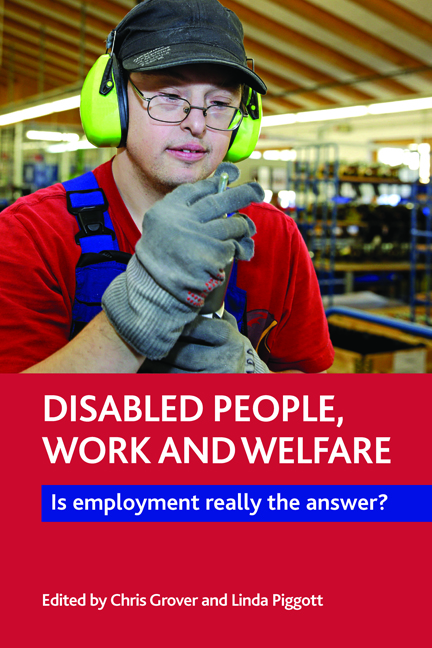 Disabled People, Work and Welfare
Is Employment Really the Answer?
Buy print or eBook[Opens in a new window]

fourteen - Disability, work and welfare: the disappearance of the polymorphic productive landscape

The question of disabled people's productive contributions has been the ‘spectre at the feast’ in policy terms from early capitalist industrialisation in Britain (Barnes et al, 1999). The imperative to move formerly ‘unproductive’ disabled people, and those deemed ‘faux’ disabled people, away from welfare towards work represents a key challenge – intellectually, politically and economically. There are few more urgent themes identified in anti-welfare discourses developed since 1997 (DWP, 2003, 2008, 2011). The redoubling of efforts of Britain's coalition government to stop the ‘wasted lives’ of disabled people distanced from paid work and the perceived threat of overspending on the future economic health of the British economy suggest that this question is unlikely to become less pervasive in the coming years (HM Government and DWP, 2010). The current government position is that too many disabled people have been written off by disincentives to enter paid work and benefits that reinforce this ‘perverse’ incentive to remain out of work for often long or life-long periods (DWP, 2011).

In the interest of balance, these ideas can be seen to sit alongside anti-discrimination legislation (ADL) precepts that employers must be open to the employment of those previously excluded from the contemporary workplace (Government Equalities Office, 2010). Overall, however, the limited impact of an ADL approach and the continued growth in out-of-work benefits from 1.25 million people on Incapacity Benefit in Great Britain in 1980 to 2.5 million in 2006 (Anyadike-Danes and McVicar, 2008) arguably led to a hardening of rhetoric post the accession of the coalition government in 2010 (Lister and Bennett, 2010; Garthwaite, 2011; Grover and Piggott, 2013; Grover and Soldatic, 2013). Current debates and solutions to the disability employment problem are by their nature short term and attempts to reduce headline figures for disability and out-of-work benefits seem driven by rather febrile concerns to correct what are longstanding challenges overnight. The focus of this chapter is on the longer-run structural exclusion of disabled and ‘non-standard’ individuals. It is a strong contention of the chapter that a failure to reappraise these historical developments and a contemporary comprehension of diverse forms of productive activity will ensure policy failure and the continued stigmatisation of many disabled people (Prideaux et al, 2009).

This chapter aims to draw out the lens in exploring longer-run developments in the construction of valued and valorised contributions to advanced economies.