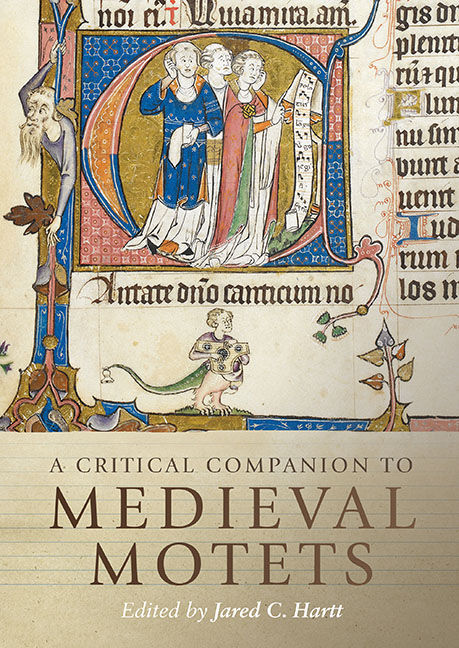 By
Catherine A. Bradley
Edited by
Jared C. Hartt
Book contents
Get access

FOR OVER A CENTURY, scholars have debated the origins of the motet and especially the motet's relationship to another genre, the clausula. A high proportion of motets recorded in the earliest manuscript witnesses dating from around the 1240s exist also in the alternative form of clausulae, which lack any upper-voice text. This presents a chronological conundrum: do motets represent clausulae with added texts, or are clausulae instead motets stripped of their words? The accepted hypothesis remains that advanced in 1898 by Wilhelm Meyer, that motets derived from clausulae. For Meyer, the clausula's liturgical heritage in the established genre of organum lent weight to its precedence, while the process of motet creation – the addition of syllabic text to pre-existing melismas – mimicked the earlier plainchant practice of prosula. Friedrich Ludwig immortalized Meyer's hypothesis in his monumental and still indispensable catalogue of the entire thirteenth-century repertoire by referring to clausulae with related motets as ‘sources’ (‘Quellen’). Nonetheless, several scholars hesitated to accept the invariable priority of clausulae in all cases, and although such expressions of doubt initially met with dispute and resistance, they have had a more favourable reception in recent scholarship.

In 2011, Fred Buttner confirmed Yvonne Rokseth's 1939 suggestion that the unusual collection of forty clausulae with accompanying vernacular motet incipits in the Saint Victor manuscript (StV) in fact represented motet transcriptions. Buttner had previously argued in favour of a motet origin for a clausula controversially identified by William Waite in 1954 as one of twenty-one irregularly notated clausulae that seemed to represent motet transcriptions in the more ‘central’ ‘Notre Dame’ manuscript F. The same clausula-motet family featured also as part of Wolf Frobenius's more wholesale reversal of the conventional ‘clausula-first’ chronology in 1987, motivated by Frobenius's conviction that French motets containing melodic snippets associated with secular vernacular refrains could not derive from liturgical clausulae. Frobenius's provocative article was disregarded in subsequent scholarship, but Franz Korndle has recently offered a more favourable re-evaluation, while acknowledging that Frobenius's grander proposition – extending claims about vernacular motets and refrains to encompass Latin motets with related clausulae – was on the whole too radical.