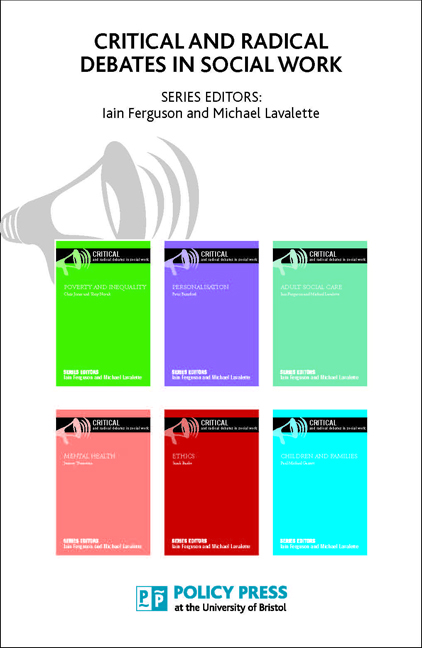 For much of its history, mainstream social work in Britain has been a fairly conservative profession. It has often reflected the dominant political ideologies of the day, while presenting itself as resolutely ‘non-political’. Thus, the first social work organisation, the Charity Organisation Society (COS) (1869), rigorously adhered to the Poor Law notion that the poor could be divided into ‘deserving’ and ‘undeserving’, rejected any form of state intervention aimed at improving people's lives (including free school meals and old-age pensions) and saw the practice of individual casework as the best antidote to the spread of socialist ideas.

By contrast, social work in the 1960s reflected a broad social democratic consensus, evident in the recommendations of the Seebohm Report in England and Wales and the Kilbrandon Report in Scotland on the basis of which the new generic social work departments were established. In most respects, the social work of this period reflected a huge advance on the punitive individualism of the COS (and, it should be said, the punitive individualism of our own time). Even then, however, there was still a tendency to pathologise (albeit it was communities rather than individuals that were seen as failing) and to ignore the extent to which statutory social work intervention continued to be experienced by service users as oppressive and paternalistic. Be that as it may, the progressive possibilities of the new departments were soon cut short by the onset of a global economic crisis in 1973 to which the Labour governments of the time could offer no answer, except cuts and belt-tightening.

What is also true, however, as we have argued elsewhere (Lavalette and Ferguson, 2007), is that there has always been another tradition in social work, an activist/radical approach which has sought to present an alternative vision both to individualism and also to paternalist, topdown collectivism. This approach, which flourished in the UK in the 1970s, located the problems experienced by those who sought social work support in the material conditions of their lives and attempted to develop practice responses that challenged these conditions and their effects.

One source of theory underpinning that approach was the excellent series Critical Texts in Social Work and the Welfare State, edited by Peter Leonard and published by Macmillan.