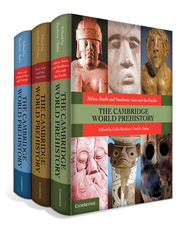 The Concept of World Prehistory

World prehistory is now recognised as a vast field of human experience. Indeed, it covers by far the greater part of the human story: hundreds of thousands or even millions of years. In comparison, the annals of written history do not extend back as far as six thousand years before the present day.

Fifty years ago, when Grahame Clark in Cambridge first published his World Prehistory (Clark 1961), the subject of prehistory had been studied and researched in a systematic and coherent way for just a century. Over that century, from the publication of Charles Darwin’s On the Origin of Species (Darwin 1859) and the public recognition in that same year of “the antiquity of man” (Lyell 1863; Lubbock 1865), the fossil record for human origins and the worldwide evidence for the origins of civilisation had been impressively documented. Yet it was only with the development of radiocarbon dating in 1949 by Willard Libby (1955), a decade earlier than the publication of Clark’s book, that some unified view of the broad sweep of prehistory became possible. For only then could a dating system be established whereby those processes and events could be set in some coherent context across the world. Only then could the development of the human species be assigned to a specific homeland – Africa – and the early outlines of the human story be written. Only then could the sedentary revolution in different parts of the world be set in the context of the climatic changes that made it possible. For then it became possible to view the key social developments that followed, including the rise of state societies, in some coherent perspective on a unified timescale. It was following the emergence of those complex societies or “civilisations”, in Sumer and in Egypt, in China, in Mesoamerica, and then more widely, that the transformative technologies of writing developed.