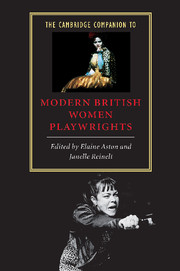 The dynamics of identity and community, marginality and self-reflection, inclusion and exclusion, are key themes across a range of writings by contemporary Scottish women playwrights. At root is a concern with the idea and the representation of the 'nation' that is Scotland.

In arguing for the efficacy of the 'imaginary' - of the nation as 'an imagined political community' - Benedict Anderson outlines a version of belonging that is eclectic, multifarious, and resists closure. He allows for a version of the nation, a version of community, that is open, egalitarian, and pacific. In opposition, and in practice, the application of the idea of the nation may be less tolerant; for nations also define themselves as exclusive and sovereign, building barriers (both literal and metaphoric) to limit access and regulate membership, determinedly separating the elect from the ostracised. It follows that nationalism will prefer, prioritise, value, and reward one grouping over another. The point in the establishment of society, of community, at which one group, one identity, is legitimised and the other disenfranchised, marginalised, cast, however crudely, as 'other', is a result of the socio-cultural development of the community, a conjunction of historical, economic, social, and political factors but defined in the nation’s traditions, myths, and collective imagination, and replayed in its cultural texts. One might suggest that, whilst nations emerge as a geo-political phenomenon, developing through an interaction of socioeconomic, cultural, and political factors, gender is a similar construction, a biopolitical system whose meaning is as dependent on shared moments of recognition and rites of passage as is that of national identity and nationalism.