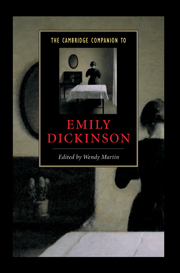 Born in 1830 in Amherst, Massachusetts, Emily Dickinson led a privileged life with a financially comfortable and well-respected family in a deeply Calvinist New England community. Her father was elected a representative to Congress and served as Treasurer of Amherst College for thirty-seven years, a post later occupied by Dickinson's brother, Austin. The Dickinson family hosted many important visitors, including the famed essayist and poet Ralph Waldo Emerson. Emily Dickinson had numerous correspondents and attended both Amherst Academy and Mount Holyoke Female Seminary. For most of her life, however, the poet spent much of her time secluded within her family's home, writing poetry and helping to run the household. She sent numerous letters and poems to her intimate friend and sister-in-law Susan Gilbert Dickinson, and she, with her sister, Lavinia, nursed her ailing mother throughout her lengthy illness and until her death, just four years before the poet's own. Dickinson's poetry expresses her struggles with her faith, with her father, with mortality, and with the challenges of being a woman and a poet.

Emily Dickinson has emerged as a powerful and persistent figure in American culture. As a woman poet, Dickinson has been portrayed as singular and enigmatic and even eccentric. Often, Dickinson is painted as a young woman in white, closeted in the upper rooms of her home, isolated not only from her neighbors and friends, but also from the historical and cultural events taking place outside her door. Her poems speak most noticeably of “the Heaven of God,” “the starkest Madness,” or the “Infinite” rather than of worldly events. She has been perceived as agoraphobic, deeply afraid of her surroundings, and as an eccentric spinster. At the same time, Dickinson is widely acknowledged as one of the founders of American poetry, an innovative pre-modernist poet as well as a rebellious and courageous woman.