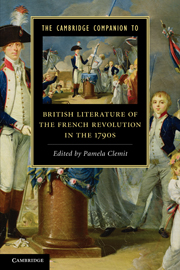 On 13 April 1792, Anna Larpent, an avid reader whose diary happily survives, called the debate on the French Revolution ‘a controversy that I cannot in its full heat form a Judgement on’, adding ‘it is impossible in these prejudiced moments to determine who is right and wrong’. To help her form her judgement she had been reading political pamphlets, including Thomas Paine's Rights of Man (1791–2) and James Mackintosh's Vindiciae Gallicae (1791). By August, though, it was through the lens of ‘a prettily wrought novel’ that she was viewing what she called the ‘french troubles in consequence of the Revolution’. The novel was Desmond, by Charlotte Smith, which had appeared a few weeks earlier in June. Although ‘an odd work’, ‘hurried' and ‘somewhat forced’, Larpent praised Smith for defending the Revolution ‘with the enthusiasm of a woman and a poetess'’ In the end, however, Smith's ‘fine imagination, & command of Language’ did not convert Larpent to her cause and she pronounced the author to be ‘a wild leveller’. Perhaps we might have predicted such a response from the affluent and urbane Larpent, daughter of the ambassador at Constantinople and wife of the Lord Chamberlain's inspector of plays, but what is remarkable is that she was gaining her political information, and shaping her political views, at least in part from fiction. In this she was not alone. During the 1790s and early 1800s dozens of ‘novels of opinion’ issued from British presses – so many indeed, that cultural historians are still rediscovering further examples. Even if, today, few of them are regarded as major literary achievements, they were, for certain sections of the population, probably as influential in moulding socio-political attitudes in late eighteenth-century Britain as any other form of cultural production discussed in this book.