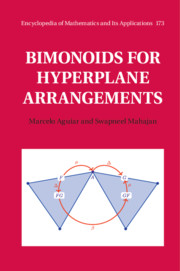 We introduce the notion of a Lie monoid in species (relative to a fixed hyperplane arrangement). This goes hand-in-hand with the notions of (co)monoid, (co)commutative (co)monoid, bimonoid. In contrast to monoids and commutative monoids, Lie monoids are considerably harder to formulate and study. Recall that left modules over the commutative and associative operads are commutative monoids and monoids, respectively. In a similar vein, left modules over the Lie operad are defined to be Lie monoids. One can also formulate Lie monoids in terms of a Lie bracket subject to antisymmetry and Jacobi identity. This arises from the presentation of the Lie operad. We work throughout with the definition of Lie monoids as left modules over the Lie operad; however, for additional clarity, we also illustrate many constructions and results using the Lie bracket formulation. Every monoid carries the structure of a Lie monoid via the commutator bracket. For a bimonoid, the commutator bracket restricts to its primitive part. Thus, the primitive part of any bimonoid carries the structure of a Lie monoid. In the other direction, to every Lie monoid, one can associate its universal enveloping monoid. These constructions can be expressed as adjunctions. The free Lie monoid on a species can be described using the Lie operad of the arrangement. There is an adjunction between the categories of species and bimonoids involving the primitive part functor. The resulting monad on species coincides with the monad induced by the Lie operad. In particular, this explains why the primitive part of a bimonoid is a Lie monoid. It also shows that the primitive part of the free bimonoid on a species is the free Lie monoid on that species. As a special case, the Zie species carries the structure of a Lie monoid and moreover, it is isomorphic to the free Lie monoid on the exponential species. All the above considerations carry over to the signed setting. Thus, we have the notion of a signed Lie monoid which is a left module over the signed Lie operad. A signed Lie monoid can also be formulated using signed antisymmetry and signed Jacobi identity which involve the signed distance function on faces of the arrangement. We also briefly discuss the dual notion of Lie comonoids. They are left comodules over the Lie cooperad. They can also be formulated in terms of a Lie cobracket. Related notions are the cocommutator cobracket, cofree Lie comonoid, universal coenveloping comonoid.