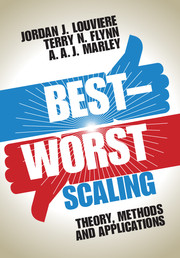 This chapter uses Case 2 best-worst scaling – the profile case – to elicit the scores that Australians associate with aspects of the ICECAP-O quality-of-life (well-being) instrument. It expands upon the methods used in a smaller study to achieve similar aims for the ICECAP-A instrument in the United Kingdom (Flynn et al., 2015). In particular, it demonstrates how latent class analyses can be used to identify distinct clusters of individuals with different preferences in their Case 2 answers. It is written for non-health economists, and therefore includes details of the “non-welfarist” paradigm that many work within.

Health care agencies in a number of advanced industrialized countries other than the United States do not fund interventions according to the patient's willingness to pay. Instead of this traditional economics “welfarist” approach, an “extra-welfarist” (or “non-welfarist”) approach is used that assigns a value to every possible health state based on some average of the population's preferences (Brouwer et al., 2008). In order to elicit these population-based preferences à priori, the set of “all possible health states” must be circumscribed in some way. This is done via the use of a standardized health (or health-related quality-of-life) instrument. The most common health instrument, the EQ-5D (Dolan et al., 1995; Kind et al., 1998), has five attributes, each with three possible attribute levels (response categories). In DCE parlance, this makes it a 35 instrument in 243 possible unique health states.

Once the set of health states has been standardized, a stated preference valuation exercise is conducted to elicit the population's preferences. The aim is to produce an “off-the-shelf” set of values – the “tariff” – summarizing the preferences of the relevant (typically country-specific whole-adult) population. Traditionally valuation exercises used numerical tasks (Arnesen and Trommald, 2005; Richardson, 1994) but in recent years discrete-choice-based tasks rooted in a random utility theory framework have increasingly been used (Flynn, 2010a; Thurstone, 1927). These have included discrete choice experiments, ranking tasks and BWS studies (Coast, Flynn, Natarajan et al., 2008; Ryan et al., 2006; Salomon, 2003). The paradigm used to conceptualize the tariff is described elsewhere but suffice to say that it must be possible to make statements such as “relative to full health, the health state characterized by moderate depression, but otherwise good health, might have a value of 74 percent while that of extreme pain might have a value of 60 percent”.