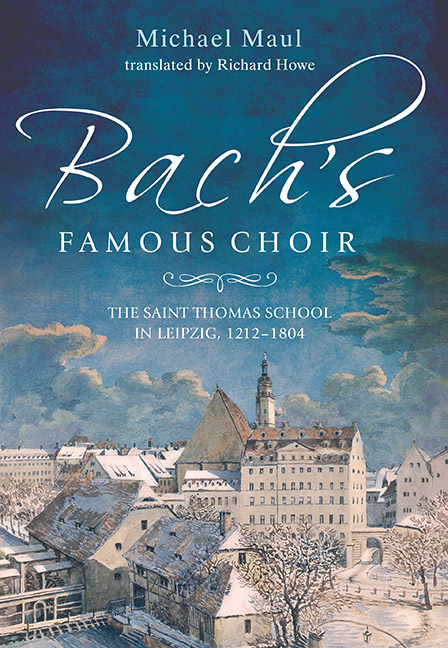 When in the year 1212 the Margrave Dietrich (the Oppressed) of Meissen endowed a foundation for the Canons Regular of St. Augustine to establish a monastery and a hospital in Leipzig, and a year later conveyed to them the old Market Church on the town's west side as their collegiate Church of St. Thomas, neither he nor the clerics had in mind any vision of what would one day be a flourishing elite music school. The charter deed drawn up for the St. Thomas Foundation in 1212 (plate 1) states that the Margrave established it ‘out of devotion to his dearly beloved wife Julia’ and ‘for the forgiveness of his sins’; it also states that he hoped the result would be that the worship of God in the Church of St. Thomas might ‘thrive in perpetual peace […] and be free of and secure against all secular commotions and disturbances’. The existence of a St. Thomas Foundation School is documented from as early as 1254, and the school may have been established even earlier, though this is not documented. As late as 1539, when the Reformation arrived in Leipzig, there were neither any plans to make the school into a music school per se nor was any such direction foreseeable. Nevertheless, at least insofar as can be ascertained from the incomplete documentation that has survived, in the course of the school's first three centuries some fundamental principles were established, if only as it were accidentally, that made possible the phenomenal future of the St. Thomas School.

Margrave Dietrich's namesake, Bishop Dietrich II of Meissen, had already founded a chapter of the Augustinians in Meissen in honor of St. Afra in 1205, and along with it a foundation-proprietary school for twelve boys in order to improve the quality of the services at the new chapter's collegiate church of St. Afra. The assumption that Margrave Dietrich had something similar in mind for Leipzig is only natural, but is neither confirmed nor refuted by the sources.