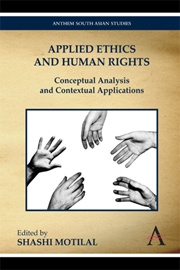 21 - ‘Moral Obligation’ to Fight for the Prevention of Greater Calamity: A Debate between Sādharana Dharma and Sva Dharma

Most justifications of violence begin with some reference to the principle of self-defence. Suffering of innocents or wrong done to them is also a reason why arms against the wrong doer should be used. Once we cross over the reasons of personal squabbles and ask why nations wage war, not only the magnitude but also the quality of arguments vary. Certain paradigmatic justifications like, ‘for the sake of prevention of greater calamity’, or ‘for the sake of restoration of good over evil’ buttresses the argument of ethics in war.

The just war theory faces its biggest challenge from the doctrine of moral pacifism. A pacifist condemns all forms of violence. A warmonger holds forth by arguing that status quo through conflict amelioration is an impotent effort towards conflict resolution. In the context of this debate I have placed the issue of ‘dharmayuddha’. Out of several interpolations of meanings, I have found Gandhi's way of resolving conflict through non-violent means contains the debate between pacifists and just war theorists. However, such was not the case with other interpretations of this term.

As I sketch the history of the concept dharmayuddha, from the days of epic, I come across several reasons why retributive justice has demanded actual and mythical wars in the Indian context. In the Mahābhārata a paradigmatic argument is given to justify a family feud over inheritance right to the throne and it is backed by Krishna's arguments from dharma.