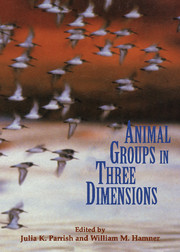 11 - Is the sum of the parts equal to the whole: The conflict between individuality and group membership

The schools swam, marshaled and patrolled. They turned as a unit and dived as a unit. In their millions they followed a pattern minute as to direction and depth and speed. There must be some fallacy in our thinking of these fish as individuals. Their functions in the school are in some as yet unknown way as controlled as though the school were one unit. We cannot conceive of this intricacy until we are able to think of the school as an animal itself, reacting with all its cells to stimuli which perhaps might not influence one fish at all. And this larger animal, the school, seems to have a nature and drive and ends of its own. It is more than and different from the sum of its units.

Aggregation behavior can be found in almost every animal taxa, from the rudimentary assemblages of planktonic larvae reacting to photo- or geokineses to the highly developed social orders of terrestrial mammals. Somewhere in the middle of this cline lie the dense aggregations of birds, insects, and fish – perhaps directed by individually based attractions/repulsions to extraneous source material, as well as by the development of simple social order. Visually, these groups may appear, at least superficially, similar. They are dense, structured congregations with distinct edges, often moving as a group from place to place. It is tempting to imagine that the forces regulating the evolution and maintenance of these congregations were/are similar as well. However, practically, we know that species are subject to very different selective pressures.