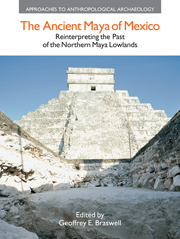 9 - In the Shadow of the Pyramid: Excavations of the Great Platform of Chichen Itza

from Part III - THE TERMINAL CLASSIC AND EARLY POSTCLASSIC PERIODS

The largest monumental construction at Chichen Itza is the Great Platform, a leveled surface so large that it dwarfs the Castillo, the Temple of the Warriors, the Group of 1000 Columns, and all the other structures that stand upon it. Yet the construction history of this platform has been poorly understood. Archaeological investigations conducted in 2009 reveal at least ten major construction episodes for the Great Platform, and serve to link the construction sequences of many of the buildings that the platform supports. This long history indicates that the basic orientation and planning of the Great Platform was established at an early date, and that the center of Chichen Itza was not built all at once—by “Toltec” invaders or by “Mexicanized” Maya—but instead slowly evolved. Moreover, the “International” style of art and architecture that dominates the final stages of construction in the heart of Chichen Itza also developed gradually over time, revealing a pattern of adoption, innovation, and adaptation. In sum, the rulers, architects, and artists of Chichen Itza were not the passive recipients of foreign influence, but instead were active participants in the creation of the International style.

Chichen Itza is justly famous for its beautiful architecture, carved lintels, hieroglyphic texts, stone sculpture, and even painted murals (Figures 1.1, 9.1, and 10.1). For this reason, Chichen Itza has become the most visited archaeological site in southern Mexico and Central America. Each day, an average of 5,000 tourists visit the ancient city, and during the equinoxes the number can be more than 40,000.