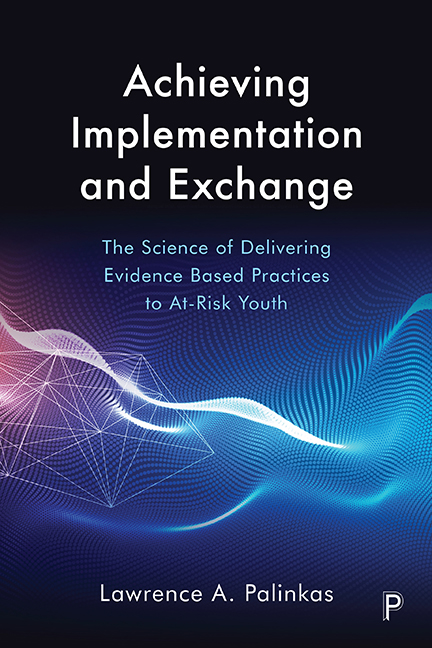 I’d say MST, Multi-Systemic Therapy by Scott Henggeler. Well promoted, good evidence-based practice, but their approach is very expensive, and in a civil service county environment…You know, some of the larger counties have been able to implement that, perhaps with the grant. We ended up choosing alternate, less expensive approaches that might serve a similar target population. So we use the public domain Intensive Case Management model based on the New York model to help treat many of our court wards at risk of group home placement. We might have done MST, but rather chose a less expensive model. (Mental health services director)

As we observed in the last chapter, the evidence used to support an EBP can come from a variety of sources. One often thinks of EBPs as being supported by rigorous scientific methods using data that is more often than not collected from populations and communities that are external to the community considering implementation. An agency in the United Kingdom considering the adoption and implementation of multisystemic therapy (MST) (Henggeler et al, 1998), for instance, may be asked to place their faith in the evidence-base of this EBP that was generated from a randomized controlled trial (RCT) conducted in the United States or Australia. To the degree that MST works in the U.K. in much the same manner that it does in the United States, the EBP and the evidence base for the EBP can be viewed as being global in nature. Global evidence is external (that is, originates outside of an agency or jurisdiction), scientifically rigorous (for example, RCTs), and generalizable or transferable from one setting to another. Global evidence is the foundation for EBP.

In the last chapter, however, we also identified other sources of ‘evidence’ used in the evaluation of whether or not to implement a particular EBP. This evidence relies heavily on characteristics of the local context in which the implementation occurs (that is, the supply of resources to support evidence use and the EBP itself, and the demand for the EBP and supporting evidence), as well as clinical experience of those responsible for implementing the EBP. These forms of evidence are considered to be local in nature.